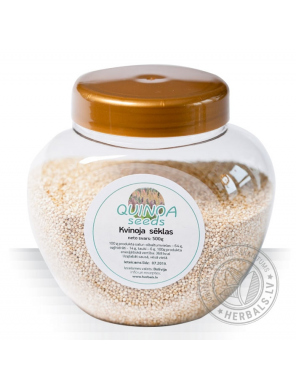 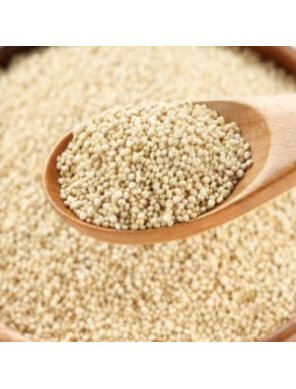 
Externally, the quinoa is very similar to the grain, and often it refers to grain, but in fact quinoa - the seeds of a plant related to spinach. It is native to the highlands of the Andes. For residents of that region the quinoa is one of the staple foods, not less in demand than potatoes and corn. Due to its high yielding and resistant to adverse conditions, it is not once saved people from the "hungry times." And for its great nutritional value and good taste it’s called "the golden grain."

By itself, the taste of quinoa is not expressed clearly. We can say that this plant has a neutral taste. That is why it can be cooked as sweet and savory dishes, can be added to hot and cold appetizers and salads, used as a meat in a vegetarian diet.

By the force of impact on the human body quinoa can not be compared with any cereal. It is a very valuable source of easily digestible vegetable protein. In some varieties of beans the content exceeds to 20%, which is significantly higher than average. In this case, the protein that is contained in the quinoa in a more balanced amino acid composition and it properties similar to milk proteins. This makes this plant an indispensable product for children, vegetarians, pregnant women, athletes and people who are constantly exposed to greater physical or mental stress.

However, apart from the protein in quinoa there are many more other nutrients. It is rich in iron, phosphorus, zinc and calcium. In its composition are vitamins, minerals, fiber, carbohydrates, and fats. 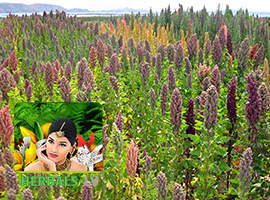 Quinoa is one of the most protein-rich foods we can eat. It is a complete protein containing all nine essential amino acids.

Quinoa contains almost twice as much fiber as most other grains. Fiber is most widely known to relieve constipation. It also helps to prevent heart disease by reducing high blood pressure and diabetes. Fiber lowers cholesterol and glucose levels, may lower your risk of developing hemorrhoids and may help you to lose weight as it takes a longer time to chew than does other foods because it makes you feel fuller for longer and is less “energy dense” which means it has fewer calories for the same volume of food.

Quinoa contains Iron. Iron helps keep our red blood cells healthy and is the basis of hemoglobin formation. Iron carries oxygen from one cell to another and supplies oxygen to our muscles to aid in their contraction. Iron also increases brain function because the brain takes in about 20% of our blood oxygen. There are many benefits of iron some more of which include neurotransmitter synthesis, regulation of body temperature, aids enzyme activity and energy metabolism.

Quinoa is high in Riboflavin (B2). B2 improves energy metabolism within brain and muscle cells and is known to help create proper energy production in cells.

Quinoa has a high content of manganese. Manganese is an antioxidant, which helps to prevent damage of mitochondria during energy production as well as to protect red blood cells and other cells from injury by free radicals.

Eat quinoa for breakfast with fruits and berries! Quinoa seeds also can be used in cooking. Cook for about 15 minutes and serve with vegetables or salad.

SUPERFOODS Quinoa Seeds 1kg -50% 7.50€ A particular advantage of quinoa seeds - seeds don't contain gluten and is easy to digest
This item has been added to cart.