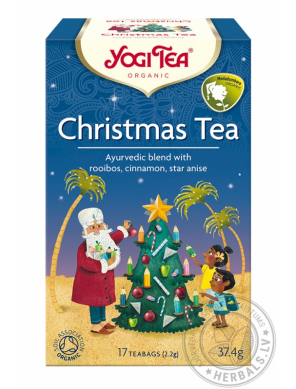 YOGI TEA® celebrates the most festive time of year with an Ayurvedic tea blend of herbs and spices including rooibos, cinnamon, vanilla, orange, cloves and star anise. Cinnamon and cloves come from Sri Lanka, where YOGI TEA® supports the educational program of our cooperating farmer society “Medadumbara Organic”. This program enables children to attend school and university and thus opens the door to a brighter future.

With the new YOGI TEA® Christmas Tea, we let the time that you spend waiting for Christmas pass more quickly by putting you in the warm, magical and reflective mood of Advent. Our Christmas creation for this year is a harmonious interplay of herbs and Ayurvedic spices such as cinnamon, orange, vanilla, star anise and cloves. We select only the finest organically grown ingredients for it.

Some of these valuable ingredients come from Madagascar. Unfortunately, the flora and fauna that makes this country so rich are now threatened by extinction due to increasing deforestation. We feel responsible for protecting this little piece of the Earth that is cultivated by our farmers and also preserving it for future generations. This is why we support the NATUREFUND ORGANISATION, which has the goal of conserving this beautiful island’s rainforests that are the habitat of many unique animal species such as the lemurs.

Brewing Suggestions: Pour 250 ml of freshly boiled water over the teabag. Allow to infuse for 5-7 minutes or longer for a stronger flavour. Add milk or milk substitute and sweetener to taste.