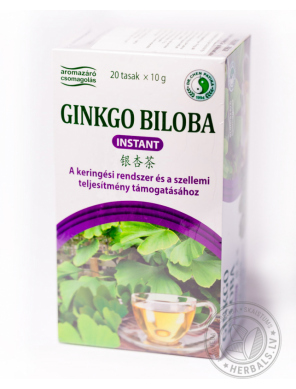 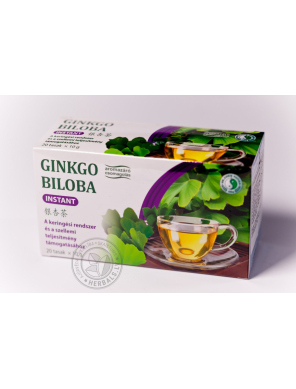 Scientists have found more than 40 components in ginkgo. But only two are believed to act as medicine: flavonoids and terpenoids. Flavonoids are plant-based antioxidants. Laboratory and animal studies show that flavonoids protect the nerves, heart muscle, blood vessels, and retina from damage. Terpenoids (such as ginkgolides) improve blood flow by dilating blood vessels and reducing the stickiness of platelets.

For people of all ages, its ability to increase vascular dilation and improve health of blood vessels means it supports brain activity, development, detoxifying mechanisms and immune function. Many of ginkgo’s most prominent benefits are tied to brain function like focus and memory as well as mental performance.

When it comes to ancient plants, nothing on our planet is older than the ginkgo biloba tree. It is the last extant branch of the Ginkophyta division, all of which are now extinct. For more than 300 million years, Ginkgo biloba has managed to survive, if not thrive, and remains only mildly endangered. Due to its vast range of medicinal qualities, and its importance for research on the evolution of plants, ginkgo biloba trees are widely protected around the world. This tree is native to China, and is still found primarily there, as it is difficult to produce saplings of the trees, and some ginkgo trees are over 2,500 years old.

To sum up health benefits of Ginkgo biloba tea:

Ginkgo Biloba provides a powerful body antioxidant needed to rid the cells from the harmful effects of free radicals and help repair cells. This is important for preventing heart disease, stroke, cancer and many other serious conditions.

3. When noise or ringing in the ears.

It has been shown that Ginkgo Biloba helps in the treatment of noise or ringing in the ears. It is still unclear how this herb promotes healthy ears, but it is believed that improves the flow of oxygen to them.

Ginkgo’s hallmark effect is increased circulation, which is important in maintaining our energy level and one of the factors in stopping early hair loss. Increasing genital blood flow heightens responsiveness, making for higher libido in both men and women. Good circulation means getting the full benefit from the foods we eat and the vitamins and herbal supplements we take.

5. Helps in the battle with Raynaud’s disease associated with reduced blood flow to the extremities.

Ginkgo Biloba works by increasing blood flow to the arms and legs, and relieves spasms in blood vessels.

Still no cure for Alzheimer’s disease and doctors are not sure what causes it. Many doctors, however, strongly believe that Ginkgo Biloba contributes positively, increasing blood flow to the brain, neural transmitters and improves the slow degeneration of brain cells.

Parkinsonat associated with uncontrollable shaking, loss of coordination and balance, and it is believed that regular use of Ginkgo biloba alleviates these symptoms. The herb increases blood flow to the brain and provides a higher concentration of neurotransmitters that are present in the brain at any time.

Ginkgo Biloba helps to prevent stroke by minimizing the formation of blood clots in the arteries and improve blood flow to major organs including the brain. In patients with a stroke, Ginkgo Biloba can help to restore damaged brain cells.

You still need research, but scientists believe that Ginkgo Biloba will be useful to treat the harmful effects of multiple sclerosis in the future.

Yogi Tea Classic 4.00€ To strengthen the heart and to improve blood circulation

TRIDOSHA Tea Arvin's 3.00€ Arvin's TRIDOSHA Tea
This item has been added to cart.