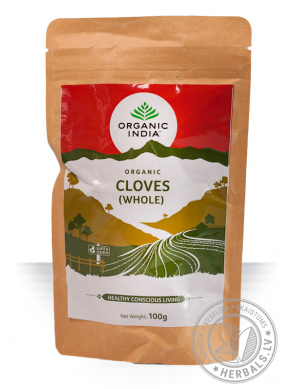 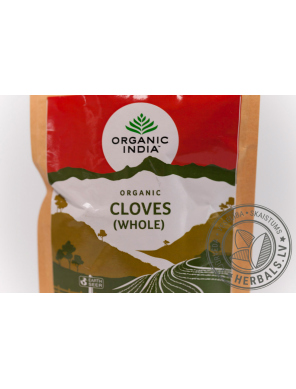 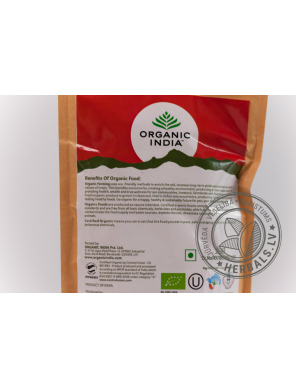 ORGANIC INDIA Cloves are used in the cuisine of Asian, African, and the Near and Middle East, lending flavour to meats, curries, and marinades, as well as complement to fruit such as apples, pears, or rhubarb. Cloves are highly aromatic and when bit into, taste warm and spicy! In Indian cooking, they are used whole in several curries and also fried with other whole spices like peppercorns, cardamom and cinnamon and added to dishes like Pilafs and Biryanis.

Cloves have a strong rich aroma with a hot and bitter taste. The heat of cooking reduces the bitterness making cloves a delicious addition to meat dishes, biryanis, curries, spiced cakes and puddings.

Cloves offer many health benefits, some of which include providing aid in digestion, having antimicrobial properties, fighting against cancer, protecting the liver, boosting the immune system, controlling diabetes, preserving bone quality, and containing anti-mutagenic properties, as well as fighting against oral diseases and headaches, while displaying aphrodisiac properties as well.

According to the National Nutrient Database for Standard Reference, the nutrients found in 100 grams of cloves include 65g of carbohydrate, 6g of protein, 13g of total lipids, 2g of sugars, 274 kcal of energy and 33g of dietary fiber. Minerals in cloves include calcium, iron, magnesium, phosphorous, potassium, sodium, and zinc. The vitamins found in cloves include vitamin C, thiamin, riboflavin, niacin, folate, vitamin B6, vitamin B12, vitamin A, vitamin E, vitamin D, and vitamin K.

CLOVES HEERA 3.90€ Cloves are highly aromatic and when bit into, taste warm and spicy!

CHILLI POWDER 1.90€ Chili powder blend is composed chiefly of chili peppers and blended with other spices