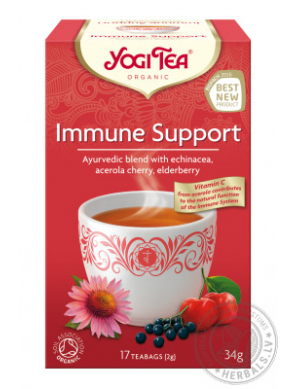 In the ups and downs of the seasons, our immune system sometimes also needs some support. In addition to a varied and balanced diet as part of a healthy lifestyle, this is just the right time to enjoy a hot cup of YOGI TEA® Immune Support. The delicately tangy taste of echinacea blends with fruity elderberry and aromatic basil. The natural vitamin C from the acerola cherry provides natural support for our body's defences.

The subtle message of this tea is: "Well protected."