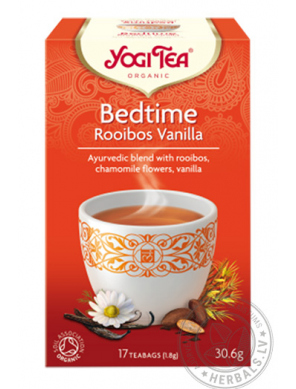 We all are looking for soothing ways to relax and unwind in the evening and to have a good restful night’s sleep. YOGI TEA® Bedtime Rooibos Vanilla combines sweet creamy rooibos, chamomile and lemon balm with cacao shells, sweet vanilla and a hint of nutmeg in this deliciously comforting tea.

Relax and breathe in the enchanting aroma of YOGI TEA® Bedtime Rooibos Vanilla. This delicious blend with its soothing, warm flavour is just perfect for drinking before bedtime, or whenever you need that extra relaxing touch. Sweet dreams!