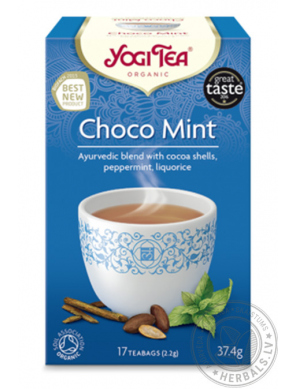 The sweet cocoa shells in the YOGI TEA® Choco Mint exude a wonderful chocolate aroma and the fresh mint has a cooling effect. This magical tea has an exquisite hint of vanilla and cardamom that delights the soul. The subtle message of this tea is: "Reset to zero."


Sometimes, after a long exerting day, our thoughts simply will not let us rest, returning to circulate incessantly in our minds. The sweet cacao shells in YOGI TEA® Choco Mint exude the delicious fragrance of chocolate, allowing us to leave the day behind. The refreshing, cooling mint it contains, complements this perfectly, as their essential oils enchant our spirit. Vanilla, a hint of cardamom and black pepper add the finishing touches to this tea.

We are particularly proud of our new tea! YOGI TEA® Choco Mint was voted as the “Best New Product” in the category “Beverages” at the BIOFACH and gained the Best New Product Award 2015. YOGI TEA® Choco Mint won over the professional audience from the world’s leading trade fair for organic food, thanks its unique combination of sweet cocoa-bean shells and fresh mint from organic farming.

Cocoa shells -The cocoa tree, which originally came from the Latin American rainforest, is primarily famous for its beans – the basic raw material of chocolate. But the shells of the cocoa bean fruit are also bursting with a sweetish-soft aroma and contain much fewer calories.

Liquorice has already been known since ancient times. Its sweetening power is about 50 times stronger than that of sugar. It tastes mild-sweetish and bitter-tart.

Peppermint - First discovered in 1696 and presumably created through the coincidental hybridisation of the water mint and wild mint, peppermint is now one of the most familiar plants in the world. Peppermint is extremely popular throughout the world due to its refreshing aroma. It has a mild, pleasant pungency.

Anise -This annual plant thrives in Asia and the southeastern part of the Mediterranean. People have revered its sweetish tasting fruit for thousands of years. In earlier times, anise was sacrificed to the gods. Now it is found in cakes and Christmas biscuits, as well as a delicious spice in many YOGI TEA®s.

Cinnamon is among the most expensive spices in the world and was supposedly already used as a spice in China in 3,000 B.C. Cinnamon is extracted from the bark of the South-Asian cinnamon tree. It has an aromatic-sweetish taste and contains valuable essential oils.

Black pepper - Also called the "king of spices," black pepper is one of the world's most important spices in addition to salt. It originally came from the Indian Malabar Coast and tastes intensive-spicy, ranging from slightly spicy to quite spicy.

Carob -Indigenous to the Mediterranean area and Asia, carob is a plant from the legume family. The long, brown fruit of the carob tree - which grows up to a height of 18 metres - taste sweetish and carry seeds that each weigh precisely 0.197 grams. Due to this special characteristic of nature, carob seeds were used as the measuring unit for diamonds in antiquity.

Cardamom has been one of the most popular spices for thousands of years throughout the entire Asian and Arabian area. Its subtle, sweetish-spicy aroma predestines cardamom for use in many different foods ranging from sharp curries to spicy Christmas biscuits.

Ginger -Whether in the Christmas biscuits, as a curry mixture or in lemonade: The bulbous ginger is among the best-known spice plants in the world. For thousands of years, it has been cultivated in the tropical heat of eastern Asia. It gives many of our YOGI TEA®s a fruity-hot and aromatically spicy taste.

Barley malt -Barley belongs to the grass family. It is indigenous to the Middle East and the eastern part of the Balkans. In earlier times, barley malt was the only known sweetener – it tastes pleasantly malty and slightly like caramel.

Cloves are the flower buds of the clove tree and primarily familiar as a spice for both sweet and salty food in the European part of the world. They belong to the myrtle family and have an intensive spicy aroma. They were even worth their weight in gold in both old China and Egypt.

TRIDOSHA Tea Arvin's 3.00€ Arvin's TRIDOSHA Tea
This item has been added to cart.