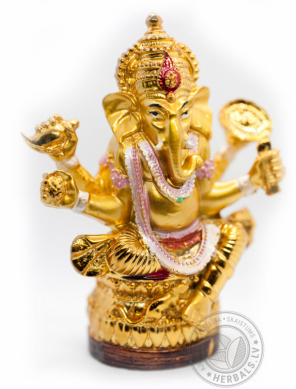 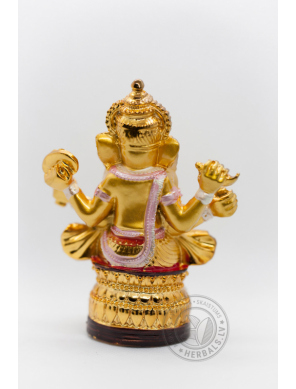 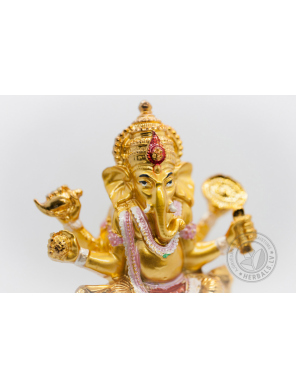 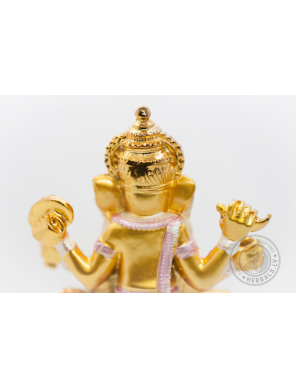 Ganesha statue with four hands. Ganesha is the son of Shiva and Parvati and takes care of people's success by averting all failures and troubles. It is also a god of knowledge and wisdom, a patron of literature and the arts

Lord Ganesha is the god of wisdom and knowledge. This deity is very popular in India, and is represented here playing a large Indian guitar called a veena. In addition, the piece portrays other attributes of the traditional iconography of Ganesha, such as the gada (mace), the paasha (rope) and the broken fang, all elements whose symbolism is contained in the avatars, or traditional stories about Ganesha, which are known well by his numerous worshippers.

Ganesha, also known as Ganesa, Ganesha or Ganapathi, is the most widely worshipped God in Hinduism. Ganesha is revered as master of intellect and wisdom and is often worshipped to remove obstacles. Its large head makes him easy to identify and encourages one to think big. The four arms indicate that Ganesha is omnipresent and omnipotent. The left side of the body symbolises emotion and the right side symbolises reason. Ganesha's small eyes represent concentration and large ears signify a great capacity to listen and assimilate ideas.